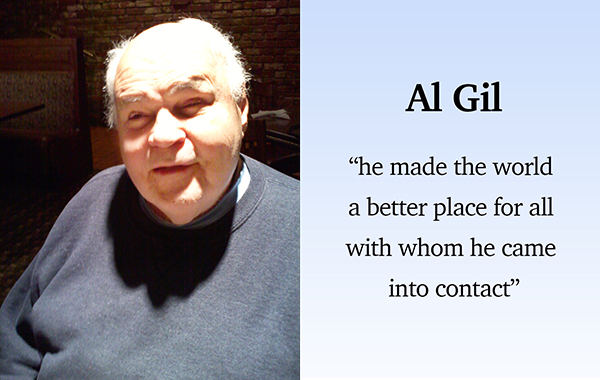 Alfred “Al” Gil was one of a kind, and it is unfortunate that his kind don’t come around more often.

Al was born on October 1, 1932, in Santa Clara, California and died at the age of 84. Al was different things to different people. He was a loving father and stepfather, involved in scouting and a host of other activities. His children remember many times when they would charge to meet the departing Greyhound to get to whatever destination Al and his family were traveling. He was a soul-mate to Connie, his wife for the last quarter-century of his life. To hundreds of rehabilitation consumers, he was the type of counselor who truly cared and wanted the best for all of his clients. To those who worked with him at the Orientation Center for the Blind in Albany, California, he was the consummate professional, but one who always had the time to help you in any way or just have a laugh. When Al worked as a counselor-teacher, he took the bus to the homes of consumers, rather than use the services of a driver. He did this to show his clients that a blind person could work and travel independently.

Al lived in various places, including Los Angeles County, the Bay Area, Sacramento, and Seattle. Wherever he went he left a legacy of friendship. He admired and cared about those people with vision loss who worked in sheltered workshops just as much as he did the leaders of the organized blind movement.

His dedication to the lives of people who are blind or who have low vision began with his student years at the California School for the Blind, although it must be said that he and his friends were probably more dedicated to having a good time at the expense of the authorities than to anything else. For 65 years, he worked in the organized blind movement, on behalf of the California Council of the Blind, the Washington Council of the Blind, and, of course, the American Council of the Blind. Although Al worked in the field of rehabilitation, his expertise in blindness was exhaustive and wide-ranging. He was a font of knowledge in crafting resolutions, except during the late hours when he would occasionally be known to snore rather vociferously.

Perhaps the reason Al had so much love for not only his family, but his colleagues in the blindness community, is that Al loved life to the fullest. He loved, among other things, old-time radio, classical music, sports, and of course anything that could make you laugh. His imitations, including the UC Berkeley Marching Band, and the classic Greyhound bus, never failed to wow his audiences. And the only thing he seemed to have more of than friends was jokes to tell them to.

So yes, Al Gil was one of a kind, and he made the world a better place for all with whom he came into contact.