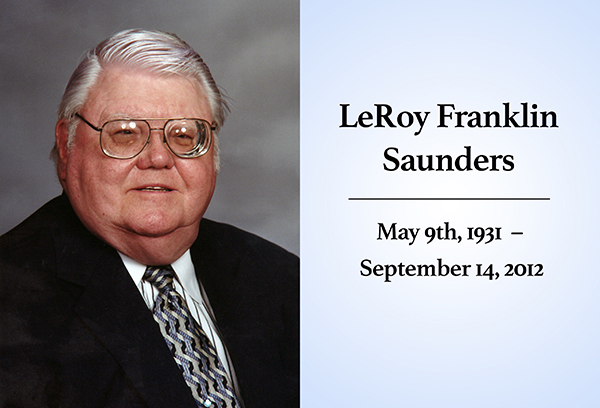 LeRoy was born in Georgia and when he was a young boy his family moved to Virginia where he began his career in 1951 with Virginia Industries for the Blind. In 1973 he moved to Oklahoma City where he was the Assistant Director for Oklahoma League for the Blind, later becoming Executive Director, and remained there until 1992.

LeRoy had many passions in life and dedicated himself to finding ways to improve employment opportunities for the visually impaired. While Director of the Oklahoma League for the Blind, he was constantly looking for ways to modify saws and other equipment so a totally blind person could safely operate the equipment.

When he moved to Oklahoma he was President of the National Blind Bowling Association and helped start a league in Oklahoma City.

LeRoy served three two year terms as our President and was a life time member. He was the first partially sighted President and the first to provide his board members with braille materials. He also served as Treasurer of ACB, Chairman of the American Council of the Blind Enterprises and Services, as well as Convention Coordinator.

In 1995 he was appointed by President Clinton to the President's Committee for Purchase from People Who Are Blind or Severely Disabled. He was the recipient of many awards, including; The George Card Award from ACB,  the M.C. Migel Medal from the American Foundation for the Blind and the Irwin Award from National Industries for the Blind.

In Oklahoma LeRoy is remembered and admired for the caring and gentle leadership he demonstrated.

We were pleased to receive many positive thoughts and memories from our ACB members and friends, regarding LeRoy's passing. The following are excerpts from a few of the many we received:

"Even though he was president and had a lot on his plate, he found the time for the individual members when they needed him."

"When I was a very new member of ACB from a tiny affiliate who was just beginning to make its mark, Leroy always knew who I was and always took the time to speak to me and ask questions that made me know that he knew exactly who I was."

"I know he was the first low-vision president for ACB, and that meant a lot to me as a later life low-vision joiner."

In summary, LeRoy was a friend, a motivator, an educator, a helper, and a mentor. He is truly missed.

LeRoy is survived by his wife Pat, of 30 years, son Franklin and his wife Lynn, and daughter Becky Wallace.