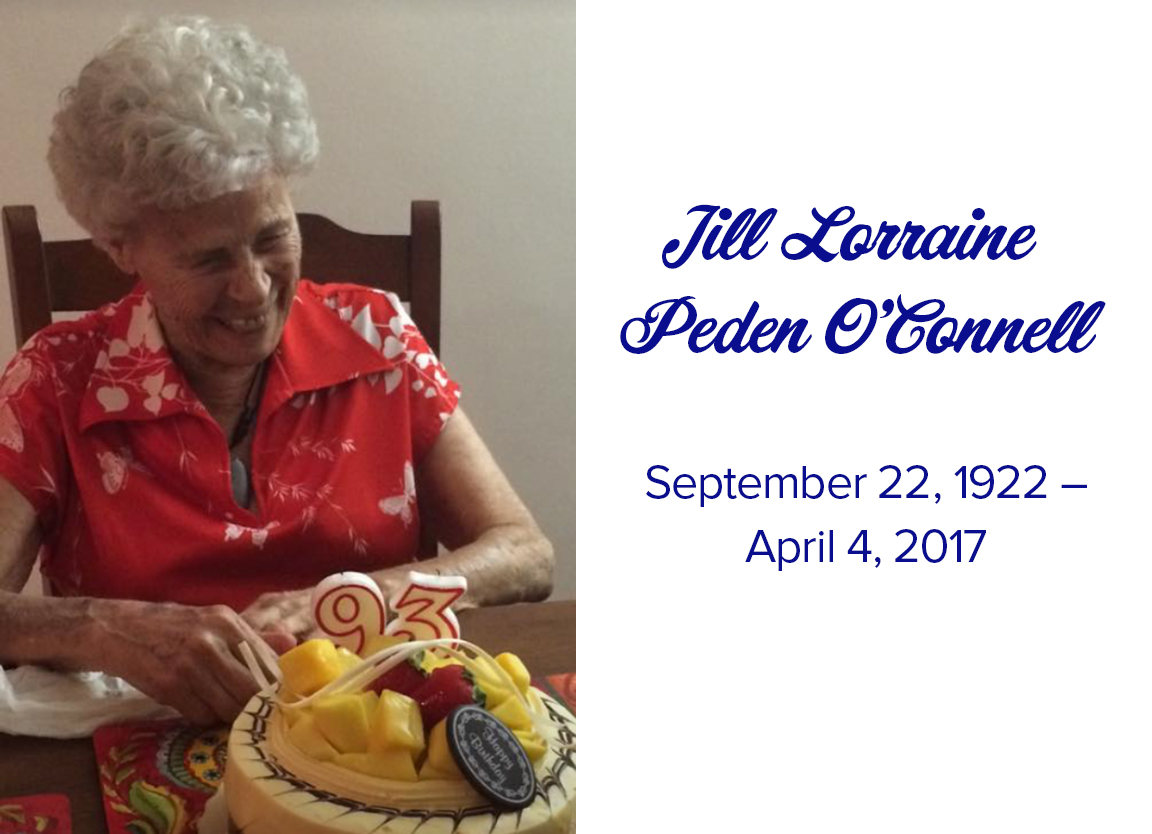 Jill was born in Bakersfield, California, but by the time she started school, her family had moved to Los Angeles.  She was legally blind, but started out in a public school with her sighted twin brother Jack who was expected to help her.  For pretty obvious reasons, this plan did not work out well, and she was eventually transferred to another school in Los Angeles where other blind children were being taught.  Later she transferred to the California School for The Blind in Berkeley.  She attended public high school while still living there.

After high school, she attended the University of California, Berkeley, where she graduated with a degree in Social Work.  For a short time, she pursued a career in that field, but ultimately decided she was not suited to that profession.

In the late 1940’s she married Terry O’Connell, a blind man she had known since their school days in Berkeley.  Together they raised three sighted children, two girls and a boy.  Jill was a very busy mom!  She was involved in PTA, and led both boy and girl scout troops.  She and Terry strove to give their children the best possible childhoods they could provide!  They went on many backpacking and camping expeditions which Terry planned for them down to the most minute detail.  It was said that these expeditions were not Jill’s favorite activities, but she always went along!

All three of the O’Connell children grew up to be successful adults with children of their own.  Besides her children, Jill is survived by four grandchildren and three great grandchildren.

When Jill’s children were grown, she became a Medical Transcriptionist; a field that she worked in until her retirement in the early 2000’s.  She worked for many years at the VA hospital in Long Beach before moving to Humboldt County in Northern California, where she did private contract work for several area doctors.

Jill was an active member of ACB for many years and was also a member of several affiliates.  She was a member of the Visually Impaired Secretarial Transcribers Association; The Braille Revival League; and Library Users of America.

Her greatest passions were reading and Braille Literacy.  Though she could see well enough to use a CCTV for things like reading mail, she always preferred to read everything she could lay her hands on in Braille.  Her BrailleNote Apex was one of her most prized possessions, and she both marveled and delighted in the fact that it brought her online access to more books than she would ever finish reading in her lifetime.

One of her proudest accomplishments was tutoring an elementary schoolchild who was losing his sight and struggling to learn Braille, to become a proficient Braille reader and ultimately to love Braille!  That child grew into an extremely successful young man who graduated from Stanford University and is now working for Apple in the area of Braille accessibility as a developer/programmer!  He and his family attribute his success completely to Jill, and she was privileged to attend his Stanford graduation as a part of his family!!  He outfitted a MacBook for her that she used in her last few years of life, and they remained fast friends until her death!

I met Jill in 1978, when her husband Terry and I attended the same Guide Dog class where we received sister dogs.  This gave us a special bond and reason to stay in touch.  I was a college student then, and having attended public schools all my life, had never known any blind adults.  I spent many weekends at the O’Connell home, enjoying their company and learning about life from a blind adult perspective.

It is because of Jill that I learned about ACB.  She submitted my name to Bob Campbell who was then president of The American Council of The Blind of California, (today known as the California Council of The Blind) as a candidate to attend the National Convention that summer as the student representative from California.  I was chosen, and attended my first convention in St. Louis in 1981.  For me it was a life-changing experience!  I remain a member in good standing to this day, and I owe it all to Jill!  Because my first convention was in St. Louis, I am exceedingly delighted to be able to present Jill’s ACB Angel here!

Rest in peace my dearest friend!  There are not adequate words to thank you for all you have given to my life and to the lives of so many others!  I miss you every day!