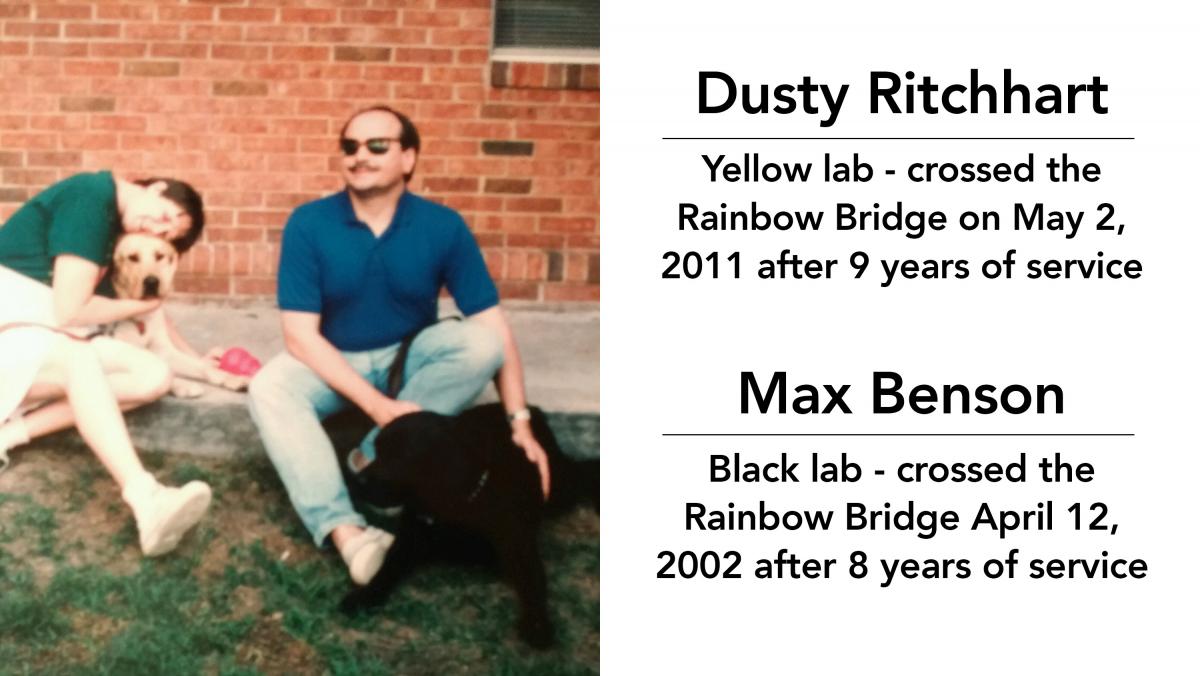 Guide Angels of My Eyes

Casie and Max were our first guides, and you might say they played the role of matchmaker in bringing Michael and I together.

Casie as a guide never passed up a doughnut shop. If it was on our path while walking, he made it a point to take me right to the front door. I found out the reason was his trainer worked him first every morning and a stop at the doughnut shop was part of his training. Casie also liked physical gestures, whether they came from me or the 8-foot mechanical gorilla at the car wash. I could not figure why whenever I got off the bus to go to the mall, Casie, instead of going left on command, wanted to go right. I contacted the O & M instructor who followed us one day to the mall. He busted out laughing, and then explained that there was a gorilla whose hand raised and pointed right to get people to enter the car wash, so Casie was just following the gesture he saw from the gorilla standing in front of him. We got the car wash to move the gorilla. Casie’s last day of guiding was to attend a ceremony at the local Humane Society, where he received a medal as a hero for his dedicated service as a guide. The Casie Ritchhart Award is presented to a dog each year in his memory.

Max was a very smart guide who taught Michael early on that Michael should trust him. Max didn’t like water and would hop over small puddles before walking through them.  One day Michael was taking Max out for relief back behind the bank building where he worked, and there was a pond with a bridge over it. Michael gave the forward command and Max refused. Michael gave the same command a couple of more times, and Max was having no part of it. Michael then stepped forward pulling Max right in with him into the pond. Max and Michael were soaked, and Max let him know of his displeasure. After this the bond of trust was strong. Max was also responsible for getting legislation changed in Georgia so that he could accompany Michael to his snack bar every day. In Georgia, you were not allowed to have your guide anywhere next to food products, no matter what. It was an old law, and even though the Board of Health said it was allowed, BEP counselors said no. So Max stayed home until the law was changed to state that a vendor could have his guide with him at his vending facility.

Dusty, even though a blonde, was very smart. Dusty was my guide as I attended classes to work on my master’s degree. He was quick (early on) to let the professor know when he was bored, either by snoring loudly or by giving a deep sigh when the professor would run long into the break period.  The professor always gave in to Dusty, stating she could not compete, and so Dusty had a reputation on campus as being the student to rank the teacher’s ability to hold the class’ attention. Dusty also like to dance. In fact, I was dancing with president Jack Lewis at the GCB conference when Dusty decided he wanted to cut in. Poor President Lewis said, “I have been in competition with other males, but this is bad when a dog cuts in.”

Rigor was unique in that he was raised in a funeral home. When Michael first came home with him I was sure he was seeing spirits, because at night he would for no reason start barking at thin air. He, like Max, had policy change so that he could work and guide Michael on his job at the cafeteria at the Federal Law Enforcement Training Center. The government didn’t think Rigor should be allowed to escort Michael in the cafeteria. They claimed it was against the law. Even though the FDA and the ADA were on Rigor’s side. Again, it took changing policy for Rigor to be allowed to do his job. Rigor loved putting on his harness, but when out of harness he loved to play. His favorite reward was popcorn. Whenever popcorn was popping in the microwave he would run circles from the kitchen to the dining room, to the living room, back to the kitchen waiting for the microwave to stop.

Each guide had his own personality, but the one thing they had in common was their love for guiding. Even as they developed declining health, their desire to work remained. They were angels then and now.