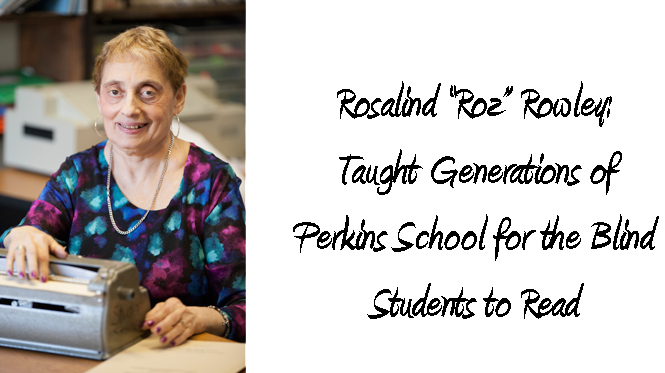 Photo provided by Anna Miller/Perkins School for the Blind

Born with low vision, Roz Rowley grew frustrated during her years in Malden, Massachusetts public schools. She was relegated to the sidelines during gym class and often had to wait for tutors to assist her with materials that were not in braille. During her junior year in high school, she transferred to the Perkins School for the Blind, where she was on the student council, participated in the drama and folk clubs, was co-captain of the cheerleading squad, competed on the track team, and served as editor of the Echoes literary magazine.

“Coming to Perkins was the best thing that ever happened to me,” she told a school publication. “It changed my life.”

After graduating, she received a bachelor’s degree from the University of Bridgeport in Connecticut and a master’s from Boston College, where she specialized in learning to teach students who are blind.

Roz married Bob Rowley in 1996. “We both liked to travel, and we both liked the same kinds of music. We just hit it off,” said her husband, who works at the Perkins library. “We would have lasted forever. We were just meant to be. Roz was the love of my life.”

Roz was a founding member of the Massachusetts chapter of Council of Citizens with Low Vision International. During her many years as a member and leader in the Bay State Council of the Blind, she served on the board, assisted in running the annual convention and enjoyed helping BSCB president Brian Charlson during the organization’s annual auction.

As a graduate of the Perkins School for the Blind and a legendary teacher there for more than 40 years, Roz had a well-earned reputation for opening the world to her students.

Concerned about the needs of her students who struggled to read, she consulted with teachers who had instructed students with learning disabilities. She decided to modify the Wilson Reading System, which is designed to help those with dyslexia or other language-based learning disabilities. She subsequently helped the American Printing House for the Blind adapt the system for students who have visual impairments. For her accomplishments, the Braille Institute named her teacher of the year for excellence in braille instruction in 2010.

While Roz was honored for that work, she also created a course in recent years that she dubbed “English for real life.” Lessons focused on how to read want ads, bus, and train schedules and how to write business letters--practical things you need to learn to become employed and independent. At Perkins and at home, she taught more than reading, however her optimism and positive disposition were as much a part of her lesson plan as the day’s reading assignments.