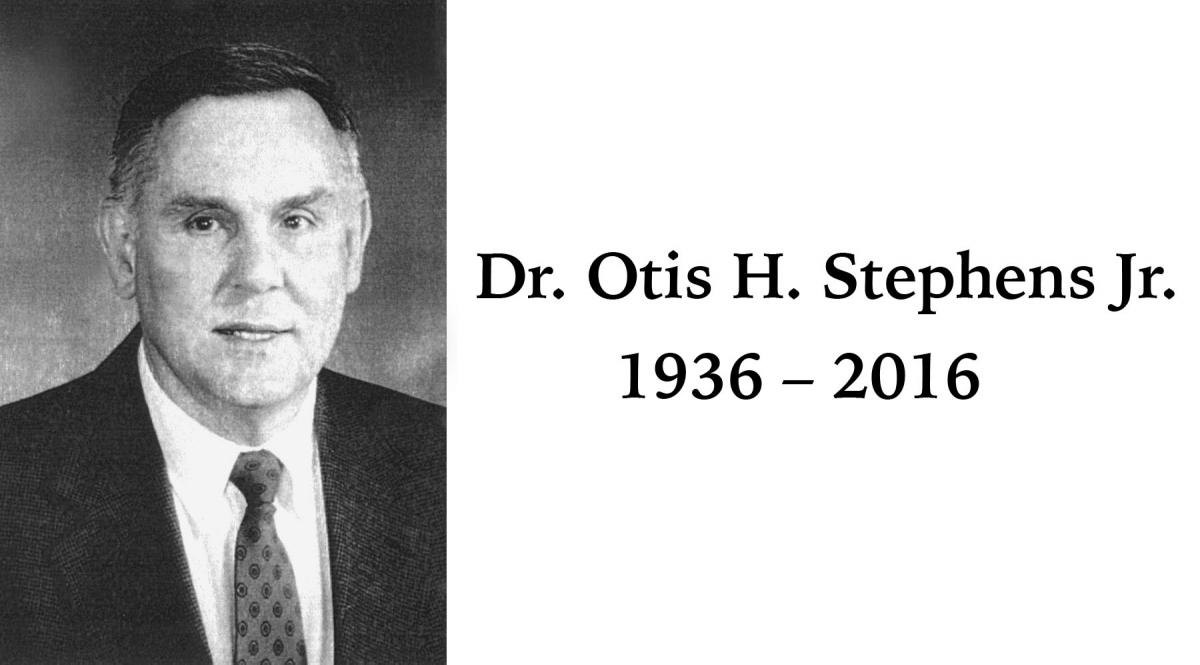 Dr. Otis Hammond Stephens Jr. was a gentleman, a leader, a brilliant scholar, an academician, an inspirational teacher, a listener, and an exemplary individual excelling in honesty, hard work, excellence and integrity. He will long be remembered in the historical chronicles of the American Council of the Blind and in its early successes. From 1987 to 1989 he unselfishly led the American Council of the Blind as its president at a time when he was also coping with the needs of his family, as his wife was fighting the final stages of terminal cancer.  Never complaining, he tirelessly led ACB during the years immediately preceding the 1990 passage of the Americans with Disabilities Act.

With an understanding of the struggle for justice, equal rights and equal treatment for all, Otis spent his life fighting for equality and justice for individuals with disabilities.  Besides the American Council of the Blind, he used his intellectual training, leadership skills and tireless energy to serve in leadership positions with the National Accreditation Council for Agencies Serving the Blind and Visually Handicapped (NAC) and the American Foundation for the Blind. In 2001, he was the recipient of the M.C. Migel Medal from the American Foundation for the Blind.  This award, the highest honor in the blindness field, was for his work significantly improving the lives of people with vision loss.

Dr. Stephens’ excellence in scholarship and academic achievement dominated his lifelong curiosity and intellectual search for knowledge and understanding. This was fully reflected in his teaching and writing. He obtained undergraduate, graduate, doctoral and post-doctoral recognition and degrees from the University of Georgia, Johns Hopkins University, the University of Tennessee, and Harvard University. Throughout his lengthy career, he received many expressions of honor, love and respect from his students and fellow faculty members. Georgia Southern University, the first school where he taught, dedicated their yearbook to him in 1966. He was named the Associate Dean of the College of Arts and Sciences and the head of the Political Science Department at the University of Tennessee. He wrote, co-authored and edited 6 books in his field. The most notable of which are a widely used casebook on American Constitutional Law, now in its 6th edition, and a history of the Georgia Academy for the Blind.

Otis was a devoted husband to his first wife, Linda, and later to his second wife, Mary Ballard Stephens.  He was the loving father of two daughters. Throughout his life, he was an avid pianist and loved to travel. He was also active in his local church.

Dr. Stephens was intuitive, creative, and a great listener, a behind-the-scenes doer, and a motivational and inspirational professional blind man. Everyone who was fortunate enough to get to know Otis couldn’t help but admire and respect him for his endless accomplishments and successes. During his leadership of ACB, he struggled with the organization’s ongoing financial problems of the 1980s and introduced ACB to the Combined Federal Campaign which over the years has become a vital financial contributor to ACB’s operating budget.

During his years of academic, philanthropic and advocacy service, Dr. Stephens regularly attended annual meetings of the American Association of Visually Impaired Attorneys, previously the American Blind Lawyers Association. He unselfishly and generously shared his time, knowledge and talents by providing annual updates of the law with an in-depth review of the Supreme Court’s current term’s decisions. His knowledge and insight were masterfully delivered, and served as a highlight of the lawyers’ annual program. His impressive, thoughtful and deliberative presentations and question and answer sessions will be remembered and missed.

The Tennessee Council of the Blind joins AAVIA in the presentation of the 2017 Dr. Otis Stephens plaque for the ACB Angel Memorial Wall. He was loved, honored and respected by AAVIA and the Tennessee Council of the Blind. Otis, you will live on as an admirable example of integrity, professionalism, genius, kindness, and caring teacher and friend. Thank you for who you were, and for all you so unselfishly gave.