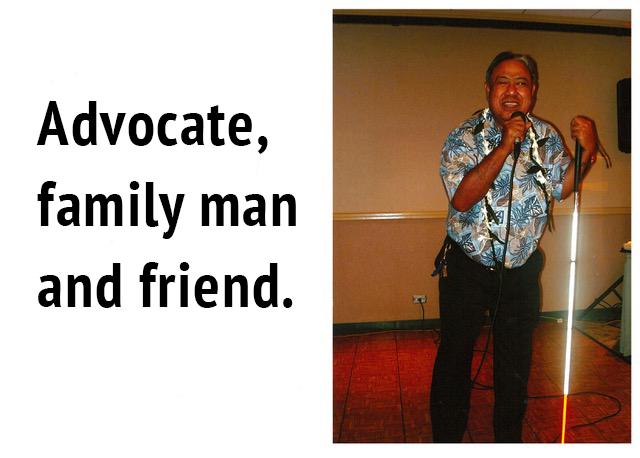 Born in Utulei, American Samoa, young Filo Kapesi Tu was sent to Hawaii because his parents knew he was going to be someone. They were right. When Filo lost his battle with cancer on July 27, 2016, he was the president of Blind Vendors Ohana, Inc. and voice of the Randolph-Sheppard Program.

In the early 1970s, Filo found his way to the Hawaii Association of the Blind by chance. Every month would find Filo waiting outside the HAB meeting room for his friend, Norman Ota. After a few months, Filo was invited to sit in on the meetings while he waited. This turned out to be the start of Filo’s long list of contributions with HAB and ultimately the American Council of the Blind.

However, Filo didn’t become really involved in the issues relating to blind and low vision people until he returned to O’ahu from Kaua’i with his wife, Jeanette, where she had operated a vending stand. It was at this time Filo became aware of the struggles and lack of rights relating to the blind community and began to get more involved.

One of Filo’s major contributions to the blind community was his co-spearheading the fight with Warren Toyama in the lawsuit against the State Department of Human Services and the State Department of Transportation in the Circuit Court to return the Newsstand Concession to the Blind Vending Facility Program. In 1970, the concession operation at the Honolulu International Airport was abruptly and improperly taken away from the blind. From 1984 to 1994, a ten-year battle ensued. After constant meetings with lawyers and many fundraisers, things were finally resolved and Blind Vendors Ohana took control of the Newsstand Concession on June 1, 1994.

The experiences of those early years led Filo to become the strong advocate who would give as many opportunities to individuals who would otherwise have a hard time finding a job. Majority of the workers at Blind Vendors Ohana were disabled. On top of that, he would overrule his Human Resources department to keep disabled employees.

The community also benefited from his generosity. Well-known at Ho’opono, the Department of Vocational Rehabilitation, Filo contributed to the young adult summer transition program by hiring students in order to give them valuable work experience.

Filo put just as much energy into his personal life as he did his professional. In his youth, he discovered a liking for musical instruments such as the ukulele and guitar. And whether it was belting it out at a karaoke party or being invited onstage to sing with Iva Kinimaka, Filo simply enjoyed having a good time.