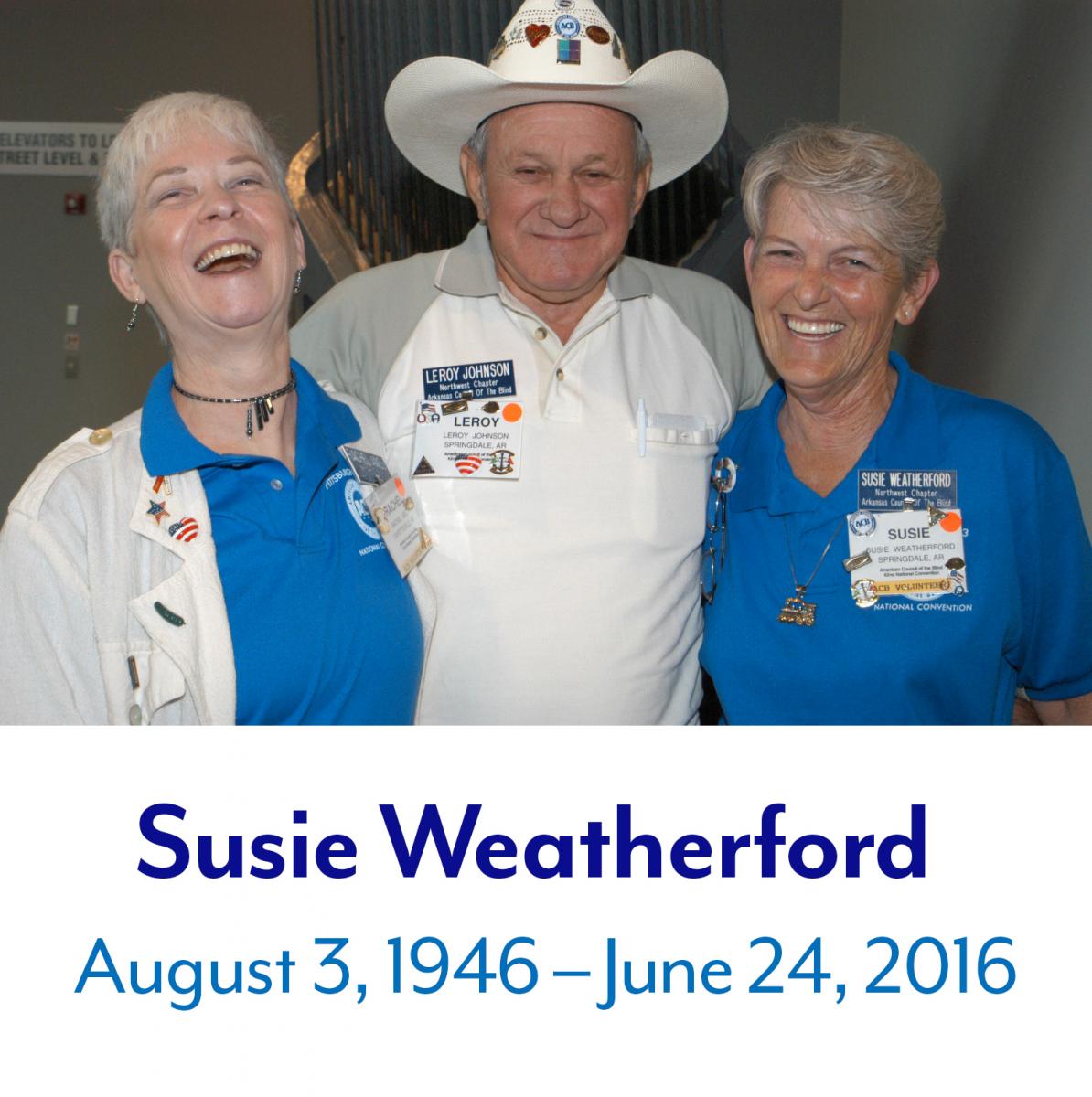 At both state and national conventions, the whirlwind that was Susie Weatherford could be seen by those with sight, and heard by those without, zipping from one task to the next, from rescuing a cane user from entanglement in the hotel lobby shrubbery to redirecting  uncertain  people to the correct restroom. She braved the streets and traffic of unfamiliar cities to run errands for anyone and everyone, bringing back everything from personal care products to pooper scooper bags. ACB convention attendees who ran into trouble or got stranded needed not fear because Susie would soon be there. If she saw something that needed to be done, she immediately took care of it, and sometimes so quickly all you heard was the faint sounds of rapidly fading footsteps, and a breeze on your face.

About 30 years ago, Susie faced a horrifying situation: her son, Jay, began losing his sight. After years of surgeries, Jay became totally blind. She was a mother, a single parent, desperate to help her beloved child, not knowing where to turn to for help or support, or that such help was even available.  Then, around 1990, she was introduced to a member of the Arkansas Council of the Blind, and both her and Jay’s worlds were changed forever. Susie found the tools and services to help her son regain his independence, and become employed. Jay is part of the vending stand program created by the Randolph-Sheppard Act, and currently runs a cafeteria in a government building located near the Missouri State Capitol.

With her introduction to the ACB, Susie found a cause close to her heart, and was an active volunteer with ACB on all levels. Through the years, Susie served multiple terms on the board of directors and as secretary of both the local and state ACB affiliates in Arkansas. She planned local workshops, including fundraising and educational events. As Program Committee Chair for the 2015 state convention, she put together an outstanding program that featured a blind documentary film maker and a visually-impaired tandem bicycling group. When she was secretary of the NWA chapter, she planned a “Paws for the Cause” event, and actively participated in all aspects. She not only planned events, she sought out sponsors, created advertisements, and if someone didn’t have a ride, went and picked them up. After an event, you would not see Susie sitting with her feet up. She’d be running a vacuum, folding tables and chairs, and washing dishes until the space was cleaner than it was before the event.

One of the goals that drove Susie was to prevent those who have lost or are losing their sight from sinking into a hopeless, helpless pit of fear and despair. Susie fought for decades to help people with visual impairments and their families receive the information, training and support services to help them understand that their life was not over, and that they could still lead an active, independent, and productive life.

Susie Weatherford was a true treasure of ACB. In every volunteer organization, there are members who go above and beyond, people without whose tireless dedication and service the organization would cease to function, people who can always be counted on to MacGyver something together to save a situation. These volunteers are worth their weight in gold, but among the gold, there are a few who shine like diamonds.  Susie Weatherford was one of these priceless gems, a rare and unique ACB jewel whose sparkle will never dim in the memories of those whose lives she touched.