It’s been so difficult to read all of the heartfelt comments from everyone on the passing of Marlaina. I was aware of how ill Marlaina was, but she has been such a fighter for so long … I had hoped there would be one more miracle for her. When I learned of her passing, I was truly sad, but then what I was happy about is that she isn’t in pain or struggling for her next breath anymore.

I am imagining her with her strong, clear, beautiful voice, organizing all of the guide dogs and other advocates that left us previously, to make everything wonderful for everyone in heaven. She just had such a way of making things happen, and wanting to be there when change happened.

Marlaina and I shared many guide dog moments as early leaders in GDUI. People in Massachusetts always speak most highly of Marlaina, as she was a vital part of forming the Bay State Council of the Blind.

Since 2007, I really had the opportunity to work with her and get to know her even better as we each served ACB as first vice president and secretary respectively. When I was elected president in 2013, Marlaina was right there serving as second vice president. We worked on many projects together and made many decisions for ACB.

She will truly be missed by so many. What a legacy she will have! I am honored to have called her my friend.

Marlaina and I met back in the early ‘80s and became close friends even though for most of that time we lived on different coasts. We enjoyed folk music and good food and we would get together whenever possible for both. We spoke two weeks ago, and Marlaina told me then that she was going to enter hospice care the following Monday. When Marlaina moved in with Gary when he lived in Huntsville, Ala., they took in a close friend of the two of us, a gentleman by the name of Scott Johnson, who was dying of lung cancer. They provided care for Scott during his final months. That’s who Marlaina Lieberg was and how I’ll always remember her. She was unique.

Wow, what a loss.  It’s certainly been a rough couple of months for WCB.

I was very happy to see Marlaina at Sue Ammeter’s funeral and take some time to visit with her.  I had no doubt her time left with us was pretty short.  Even so, she spoke with eloquence and feeling at the funeral.  It was a real sacrifice for her to attend at all because it’s a fair distance from Seattle to the Olympic Peninsula.

Marlaina was a tremendous advocate for the blind, and truly made a mark in the field of blindness technology in her work with Traico.  From her days acting as a receptionist for ACB, her involvement in the Bay State Council, and her most recent involvement in the Washington Council of the Blind, Marlaina has been a strong and committed leader. She will definitely be sorely missed.

I join the thoughts of so many of you about Marlaina. I will only add a humorous memory that she never let me live down. When I was resolutions chair, I had a BrailleNote issue and they dragged Marlaina out of the swimming pool to solve my problem. She walked into the committee dripping wet, but of course handled things effortlessly, and never let me forget how I had deprived her of swimming time.

My heart is broken by the news of Marlaina’s passing.  Karyn’s and my heartfelt sympathy go out to Gary and to Marlaina’s family.

There are certain people you meet in life who are genuinely one of a kind. Marlaina was one of them. She truly cared about other people in a special way. Like many of you, I have tons of Marlaina memories; I’ll just share a few here.

One of my favorite ACB Radio shows of all time was the Marlaina Show, which used to run Sunday evenings at 10 Eastern. She made everyone feel special, especially those who called her show. She always asked how you were and she really wanted to know. She always had a kind word to say about each caller after she hung up.

Marlaina and I shared a passion for wanting to do everything we could to make sure people with other disabilities in addition to blindness could fully participate in ACB. I remember one time on the convention floor she brought up something about that subject. She got some blowback, and I took the microphone to support Marlaina. She told me later she wanted to run right up there and give me a big kiss.

If there was a more tenacious bidder at ACB auctions than Marlaina, I don’t know who. When Marlaina saw something she wanted, look out, she probably was going to get it.

If it weren’t for Marlaina, I may have never become ACB’s first male secretary. In 2013, I actually was considering another office, but wanted to talk with some of the officers serving at that time to get their thoughts and advice. Marlaina encouraged me to run for secretary, and a couple of times when she couldn’t attend a board meeting during her tenure as secretary, she asked me to take minutes. When I made the decision to run, she was the first person I told, and she said she’d been praying I’d make that decision. Marlaina was a huge help to me in my first year as secretary, giving me good advice and encouragement.

Finally, a lot of us talk the talk about wanting to bring younger people into ACB. Marlaina walked the walk, bringing several younger members in, mentoring them and helping make sure they found their way in ACB.

Marlaina, rest in peace after a life well lived. I love you and I will miss you greatly!

Marlaina was one of those remarkable people who touched many hearts and lives, not just in one way, but in many ways. She made a difference in multiple areas and was a tireless advocate, dedicated guide dog handler, technology enthusiast and broadcaster. And that just scratches the surface of Marlaina’s impressive legacy.

It was my great privilege to work with Marlaina in two key areas, the early days of ACB Radio when I was its founding director, and at Pulse Data/Humanware when I was Blindness Product Manager.

I wanted to share with my ACB friends an audible memory of Marlaina. Eric Bridges and I got shanghaied by Marlaina late on a Tuesday night at convention in 2008 to appear with her during general session the next morning to talk about the legislation that would ultimately become the 21st Century Communications and Video Accessibility Act. Anyhow, it turned out to be a blast, and it was a lot of fun to share an improv stage with my buddies Eric and Marlaina, and it is a happy memory of mine that I want to share with you all. You’ll especially enjoy Marlaina’s improvised commercials she performs for this mock talk show format. God bless you, Marlaina, and thank you so much for calling us your friends and for giving us so many reasons to smile.

Marlaina’s death is such a loss to the blindness community, and, of course, for all of us who knew and loved her. I met Marlaina shortly after I came to work for ACB in the late 1990s. I was drawn to her upbeat demeanor, zest for living, and kindness immediately. Marlaina and I had many friends in common, people who had grown up with her and had known her forever. They all shared so many — nearly all really funny — stories with me that, in some ways, I felt like I had known her forever.

Over the years, we stayed in touch. Every time we connected, we enjoyed one another’s company. Marlaina was passionate about guide dogs and contributed so much enthusiasm and hard work on the national level as well as locally to the guide dog community. Who else would have “1GuideDog” as her e-mail address? I think we should retire that address in the way that we retire the jerseys of famous sports heroes! 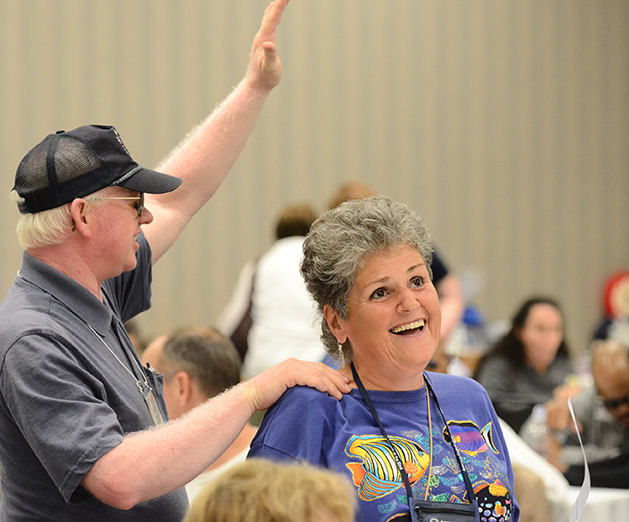 Marlaina Lieberg, sporting a bluish-purple shirt printed with several multicolored fish, stands up, smiling, as Robert Spangler, left, taps her on the shoulder to acknowledge her bid on an item at the 2013 auction.

American Council of the Blind